Dropout is a regularization technique that prevents neural networks from overfitting. Regularization methods like L2 and L1 reduce overfitting by modifying the cost function. Dropout, on the other hand, modify the network itself.

Deep neural networks contain multiple non-linear hidden layers which allow them to learn complex functions. But, if training data is not enough, the model might overfit. We use regularization techniques to reduce overfitting. 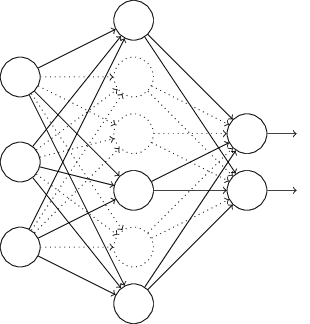 What dropout regularization does is to randomly drop neurons (along with their connections) from the neural network during training in each iteration. When we drop different sets of neurons, it’s equivalent to training different neural networks (as in ensemble methods). So, the dropout procedure is like averaging the effects of large number of different networks. The different networks will overfit in different ways, so the net effect of dropout will be to reduce overfitting. Also, these networks all share weights i.e. we aren’t optimizing weights separately for these networks. (tip: so basically every network gets trained very rarely.) But, it works. It serves its purpose of regularization.

In dropout, the network can’t rely on one feature but will rather have to learn robust features that are useful.

Data Science   Deep Learning
« How deep should neural nets be? A visual introduction to eigenvectors and eigenvalues »