As discussed in the post linear algebra and deep learning, the optimization is the third and last step in solving image classification problem in deep learning. It helps us find the values of weights W and bias b that minimizes the loss function. 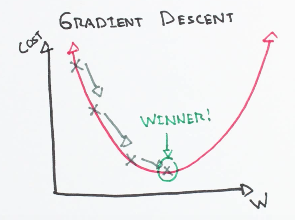 We use the concept of following the gradient to find the optimal pairs of W and b i.e. we can compute the best direction along which we should change our weight vectors that is mathematically guaranteed to be the direction of the steepest descent. This direction is found out by the gradient of the loss function.

There are two ways to compute the gradient:

Now that we can compute the gradient of the loss function, the procedure of repeatedly evaluating the gradient and then performing a parameter update is called gradient descent.

This simple loop is at the core of all Neural Network libraries.

The extreme case of this is a setting where the mini-batch contains only a single example. This process is called Stochastic Gradient Descent (SGD) (or on-line gradient descent).

Gradient descent is one of many optimization methods, namely first order optimizer, meaning, that it is based on analysis of the gradient of the objective. In order to calculate gradients efficiently, we use backpropagation. Consequently, in terms of neural networks it is often applied together with backprop to make an efficient updates.