In the earlier post The gradient problem in RNN, you came to know that RNNs have exploding and vanishing gradient problems. This post discusses how exactly the gradients are calculated in RNNs. Let’s take a deep dive into the mathematics of RNNs.

defines the RNN structure. Here, \(s_t\) is the state vector at time t. It can be written as

Here, \(\phi\) is the activation function say \(tanh\). The output vector can be written as

The unrolled representation of RNN is shown 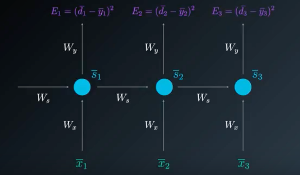 The backpropagation algorithm applied to this unrolled (unfolded) graph of RNN is called backpropagation through time (BPTT). RNN takes into account its history i.e. the previous states as evident from its equation. The current state depends on the input as well as the previous states. Thus to update the weights, the gradient of loss function at particular time step t depends not only on the input but also on the gradients of previous states at all the previous time steps. The total loss for a given sequence of input values paired with a sequence of output values would be the sum of the losses over all the time steps.

In the same way, the gradient of loss w.r.t. \(W_x\) can be calculated. The general formula for gradient calculation is

The problem with BPTT is that the update in weights require forward through entire sequence to compute loss, then backward through entire sequence to compute gradient. The slight variant of this algorithm called Truncated Backpropagation through time (TBPTT), where forward and backward pass are run through chunks of sequences instead of the whole sequence. It’s similar to using mini-batches in gradient descent i.e. the gradients are calculated for each step, but the weights get updated in batches periodically (as opposed to once every inputs sample). This helps reduce the complexity of the training process and helps remove noise from the weight updates. But the problem with TBPTT is that the network can’t learn long dependencies as in BPTT because of limit on flow of gradient due to truncation.

Note that backpropagating for large number of steps leads to the gradient problems.