The gradient problem in RNN

The vanilla Recurrent Neural Network (RNN) has the following structure:

But, the gradient flow in RNNs often lead to the following problems:

The gradient computation involves recurrent multiplication of \(W\). This multiplying by \(W\) to each cell has a bad effect. Think like this: If you a scalar (number) and you multiply gradients by it over and over again for say 100 times, if that number > 1, it’ll explode the gradient and if < 1, it’ll vanish towards 0. 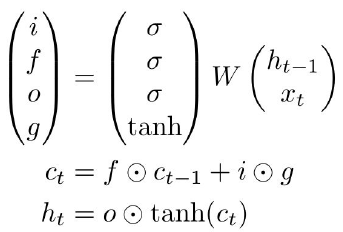 Inside the cell state, we can either remember or forget our previous state, and we can either increment or decrement each element of that cell state by up to 1 in each time step. These cell states can be interpreted as counters (counting by 1 or -1 at each time step). We want to squash that counter value in [0, 1] range using tanh. Then, we use our updated cell state to calculate our hidden state, which we’ll reveal to outside world.

The first step in our LSTM is to decide what information we’re going to throw away from the cell state. This decision is made by a sigmoid layer called the “forget gate layer.” It looks at \(h_{t-1}\) and \(x_t\), and outputs a number between 0 and 1 for each number in the cell state \(c_{t−1}\). A 1 represents “completely keep this” while a 0 represents “completely get rid of this.”

The next step is to decide what new information we’re going to store in the cell state. This has two parts. First, a sigmoid layer called the “input gate layer” decides which values we’ll update. Next, a tanh layer creates a vector of new candidate values, \(c_t\), that could be added to the state. In the next step, we’ll combine these two to create an update to the state.

Finally, we need to decide what we’re going to output. This output will be based on our cell state, but will be a filtered version. First, we run a sigmoid layer which decides what parts of the cell state we’re going to output. Then, we put the cell state through tanh (to push the values to be between −1 and 1) and multiply it by the output of the sigmoid gate, so that we only output the parts we decided to.