Statistics is the study of uncertainity. One way to deal with uncertainity is by probabilities.

Let’s take an example of finding probability of coin being fair. Let’s say an individual has a prior belief that the coin is fair. If after a number of tosses, say 500, the coin comes up head 400 times then the individual’s belief will be updated to coin is unfair.

Thus in Bayesian interpretation, the probability is a summary of an individual’s opinion. The different individuals may have different opinion (prior belief), as they might have different data and ways of interpreting it. However, as both of theses individuals get new information (data), their potentially differing beliefs leads to the same posterior belief. 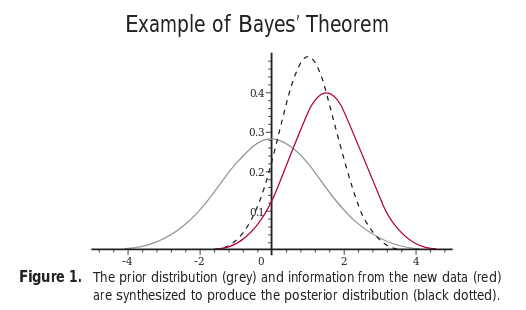 According to the Frequentist theory, only repeatable events have probabilities. In the Bayesian framework, probability simply describes uncertainty.

Frequentist notion is objective while the Bayesian one is subjective.

Statement 1 is a frequentist one. It means that if we were to repeat the analysis many times, using new data each time, then in 5% of samples where the null hypothesis is true it will be (falsely) rejected (but nothing is stated about this sample). Statement 2 is Bayesian. It applies on the basis of this sample (as a degree of belief).

The frequentist train their model using maximum liklihood principle (\(\hat\theta = max(P[X \mid \theta]))\) i.e. they try to find the parameter that maximizes the liklihood, the probability of data given parameters. However, the Bayesian will try to compute the posterior probability, the probability of parameters given data, using Bayes theorem. \(P[\theta \mid X] = \frac{P[X\mid\theta].P(\theta)}{P(X)}\)