The Rule of 72: Mathematics in everyday life

Compound interest is the greatest mathematical discovery of all time. — Albert Einstein

Now, let’s calculate the time required for the principal amount to double. Suppose, you borrow C amount from a bank, on which an annual interst rate of r% is charged, then your debt will double at the time t when

Taking logarithm on both sides and solving, we get

This is known as the rule of 72. If no repayments are made, then at an annual interest rate of r%, it’ll take approx. 72/r years for a debt to double. Also, it you invest money at r% interest rate, then it’ll double in 72/r years. 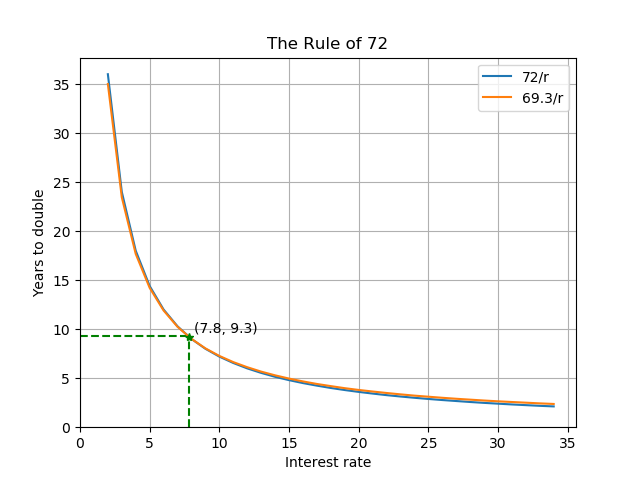 As is clear from the graph, there is a little difference b/w graphs of 69.3/r and 72/r. Thus, the rule of 72 provides a good approximation.

More accurately, the rule underestimates the doubling time when the interest rate is larger than 7.8% and overestimates when the rate is lower than 7.8%. It is the point where the graphs of 72/r and 69.3/r intersects.

Now, we can calculate the time for an amount to double in simple way. For example, when the interest is 6% p.a., we divide 72 by 6, thus, in 12 years, the amount will be doubled. The rule of 72 comes handy in everyday life.